Below is a selection of our recent productions. 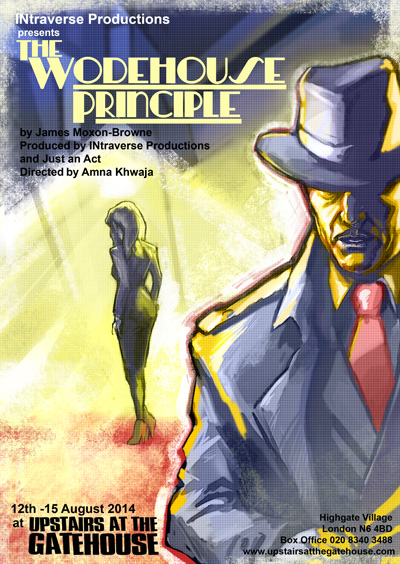 Dark comedy, psychosexual thriller - A young writer has picked up a lost mobile phone on a night out and a whole new dark story unfolds, reality and fiction blurs, this takes place in his small apartment.

A Chandelier in my Kitchenette (The Cockpit Theatre, Theatre for a Pound, 2012)

Miss Diagnosis is turning 50 this year, now troubled by his fear of lost youth he only finds solace with his dolls. Where will his hatred of short sleeved shirts, fantasies of millennium style fame, and desire for beautiful nails lead? Now memories of a little boy in Glasgow come flooding back…

The show was taken up to the Brighton Fringe under the new title In Capacity House and was co produced by Intraverse productions and Directed by Tessa Hart.

For Jimmy is new short play which was performed at The Cockpit Theatre as part of their 'Theatre In The Pound' series of evenings, showcasing new writing.

A play derived from improvisation, a joint production with Just an Act Theatre.

Drama comes full of promise. It can be the stuff of dreams. But sometimes the line between reality and fantasy can be dangerously elusive. And sometimes you have to be careful what you wish for...

'Drama Bites utilises an episodic plot line, this divisive technique allowing its audience to become swept up in a surging accumulation of psychological disturbance.' Helen Richardson for On The Fringe

This supernatural, black comedy follows successful artist Emma as she celebrates her 50th birthday with her husband Jeremy in the hour that the British summertime ends, on Halloween. Jeremy's present to Emma, a painting he commissioned an artist to paint for her, is tainted with black magic and it knows Emma's darkest secrets. Will she be forced to reveal them?

Enter our installation. Redesign your mind. A chilling exploration of the darkest side of art. This was part of The Lost Theatre festival and reviewed by the Times Critic Jeremy Kingston.

A hilarious comedy which takes place backstage in a dressing room. An all women theatre group are to perform a little known Spanish seventeenth century drama in a festival. Before curtain up, tensions mount in more ways than one and a cast member is missing! Will they win the adjudicators approval they desperatley need to gain the festival title?

Directed By Amna Khwaja. The UK premier of a play by Dan Averitt, Jon Mikkelsen and John Trones, where it's a case of he said, he said... he said. Spending a night with friends can always have unexpected consequences, but when one of them has their own agenda, the other two might just have to play along! The UK premier of the hilarious American gay sex comedy 3 Way tells the story of three young friends centred around a night of accidental drunken debauchery, where one of them knows more than he's letting on. November 18-December 7, 2008